The Captain (大尉, Taii?) is a character in the Hellsing series and a member of the Millennium forces and the Waffen-SS. The Captain is the Major's silent, stoic adjutant and bodyguard. The Captain is a natural werewolf, able to transform at will and fight in either human or werewolf form. Just as Alucard is Hellsing's trump card, and Alexander Anderson is Iscariot's, the Captain is Millennium's trump card.

The Captain is a tall man on par with Alucard and Anderson. He has snow white hair, bloody red eyes, and somewhat tanned skin. Unlike The Major and Lieutenant Rip Van Winkle, he still wears a full uniform in the main story, which consists of an overcoat similar to the green DAK (Deutsches Afrikakorps) Greatcoat with its neckguard constantly turned up and an M43 officer's cap emblazoned with the Totenkopf symbol. His trousers are a darker shade of green and he wears boots. Underneath his coat, the Captain is shown to be extremely muscular. His wolf form, like his hair, is white and fur can manifest along his body even in his human form.

The Totenkopf symbol on his hat is drawn incorrectly unlike the other SS officers in Hellsing. The Captain also seems to wear full Afrika Korps uniform, including the sage green pants of the early '41 forces.

The captain is mostly an expressionless man, not speaking a single word throughout the entire series. It is unknown why this is so, whether he is simply taciturn or unable to speak. His exact personality is hard to place, though he is utterly obedient and monstrous in battle. Even in battle or enduring pain, the werewolf's expressions do not change much. His most expressive moments were during the final battle when Alucard releases all his seals, surprising and alarming The Captain and when Seras finally kills him, in which he smiles widely.

His death indicates that he might not have willingly been on Millennium's side nor does he enjoy his own existence. A familiarized Pip Bernadotte remarks that despite his stoic demeanor, the wolf has a "flair for the dramatic", whilst he and Seras face the Captain down.

The Captain also seems to have a certain level of chivalry, as he denied killing Heinkel, instead firing into her jaw, and offering a first-aid kit. He also allowed Integra to pass in chapter/episode 10 (though this could have been simply following orders). The final, and perhaps the greatest, testimony to his chivalry is that he chose Seras to put him down, dying with apparent satisfaction.

Despite his silence, he can be seen to have a tolerance if not affection for Schrodinger by allowing the boy to read his pamphlet on invading London over his shoulder.

The Captain fought a fourteen year-old Walter C. Dornez as well as Alucard during an attack on Millennium's main research facility in Warsaw during World War II, about 50 years ago in the prequel manga Hellsing: The Dawn. He squared off with Walter and managed to resist his wires, then choke him into submission before the fight was interrupted by Alucard. Alucard, on the other hand, backed out after getting kicked in half by the Captain, and left Walter to fend for himself while chasing after the Major. It is believed, based on information in the main storyline, that Walter came to an agreement with Millennium and left the compound, having seemingly aided in the destruction of the early undead soldier project. However, there is no official word that explicitly confirms or denies this yet. Later in the same year, the Captain participated in the infamous Malmedy massacre on 17 December, during the Battle of the Bulge. (Based on a photograph in chapter 82.) From a photograph taken on the 20th, he and the Major were still in the Ardennes area. (On the back cover of volume 3.) He would ultimately travel with the rest of Millennium to South America and stay in hiding for decades. Over 55 years later, the Captain was sent to retrieve Walter for a certain process, during the invasion of England in 1999. As Walter and Integra Hellsing attempted to drive back to Hellsing HQ, Walter spotted the Captain blocking the road and approaching them. Walter then urged his master to flee, and attacked The Captain with his wires. The Captain caught them in his hands, and it looked like it would lead into a great duel, however, the battle was not shown. The Major had other plans and the Captain brought Walter to Millennium carrying out their agreement that was forged decades ago. Later on, The Captain leaped from the Major's zeppelin to confront Alucard with Alexander Anderson. He was surprised to see Alucard's 'counter-attack', and backed off for the time being.

Although he was seen in chapter 68 "Might and Magic (2)" with long strands of hair forming on his face, chapter 74 "Relics" shows The Captain swiftly shooting Heinkel Wolfe in his human form. It is revealed in chapter 76 "Finest Hour" that he deliberately shot through her cheek to spare Heinkel's life. The Captain attempts to directly communicate with Heinkel by making gestures with his head, which is interpreted as a warning to not interfere with the fight between Alucard and Walter. After tossing Heinkel a first aid kit, he leaps up into the air and departs. This scene has been a subject of interest to many fans. The Captain, a werewolf with incredible strength, speed, and the ability to regenerate, would have no need for a first aid kit, and hence, no need to even carry one. Hirano's intentions in making The Captain spare Heinkel remain unclear though it may simply be that Hirano intended to show that The Captain was more noble than his comrades, and/or had some sense of chivalry for fellow warriors. Another part of The Captain that some fans might notice is that he does not talk as much (or probably doesn't talk at all like the other characters would), and this could've shown that he might have been raised like a wolf or was human and lost his ability to talk when he was young.

At the end of chapter 81, The Captain confronted Seras Victoria and Sir Integra, who stormed The Major's zeppelin. In chapter 82, The Captain allowed Integra to pass, even pointing out the direction of the bridge to her, then engaged Seras in a gun battle, which ended with him transforming into a werewolf. In chapter 84, he stood in a two-page spread, facing Seras in the form of a monstrously large wolf. The Captain then flew toward her in a similar way to Alucard's Baskerville familiar and dealt a powerful blow to Seras, ricocheting her off a wall and the ceiling. He swiftly changed into his bipedal werewolf form and kicked her down through the floor of the Hindenburg II and onto the ground below, jumping down to follow her. In chapter 85, he displays even more of his mist-like abilities, as even after being dealt what would appear to be a fatal blow from Seras' shadows, The Captain just dissolved into mist only to reform, standing atop her shadows, unharmed. He then gave Seras a silver tooth, by which means she could have the possibility to kill him. In chapter 86, he continued to trade blows with Seras, until Seras managed to stop one of his kicks by biting and holding his leg in her mouth. This gave Pip Bernadotte (now Seras' familiar) the chance to thrust the tooth with a silver filling from a concentration camp prisoner into The Captain's chest. The chapter ends with The Captain's dog tags falling to the floor and splitting in half. The Captain then falls to the floor dying, he lies still while a smile slowly creeps on his face. He is then shown laughing, almost like a child released from a dream, before his body bursts into flames like previous Millennium members. In the 94th chapter we see his broken necklace as a possible shrine.

Much like the other two trump cards, The Captain fights with little regard for the damage done to his own body. This is likely because of his great regenerative powers and because, as evident by the fight with Seras, he does want to die. He is very agile in battle and uses his iron skin to stop lethal enemy attacks in their tracks. He does not taunt or jeer at his opponents, only glaring menacingly and intensely at them with his eyes. And like the other trump cards, his strength is unparalleled, with only a few being close to matching him in sheer might.

In addition to his natural abilities, the Captain possesses two modified Mauser C96s with incredibly long barrels, a combat knife and a large amount of Model 24 stalk hand grenades. 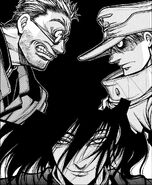 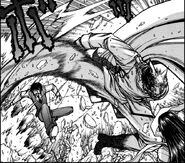 The Captain, aiming his Mauser C96 at Heinkel. 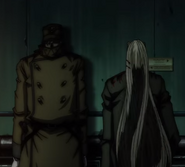 Captain's Dog Tags shown at the end of OVA X as his shrine.
Add a photo to this gallery

Retrieved from "https://hellsing.fandom.com/wiki/The_Captain?oldid=27308"
Community content is available under CC-BY-SA unless otherwise noted.