Schrödinger (シュレディンガー准尉?, Shuredingā Jun'i) was a member of the Millennium forces, and is usually directly under the command of the Major.

Schrödinger held the rank of Oberscharführer (warrant officer) and served in the Millennium military unit of Werewolf. He was created by The Doctor and while usually found sitting near the Major's throne like a pet, he also acts as an envoy for Millennium. His relationship with The Major is very different than most of the soldiers commanded by him. The Major seems to emit a sense of affection for Schrödinger, akin to the relationship of a cat owner who could never be angry towards him. Due to his ability to be "everywhere and nowhere" at the same time, he has proved to be a useful spy and messenger for Millennium's forces.

Taking the form of a young boy, although he appears to be around 14 which is also the minimum age of Hitler Youth membership, with cat ears and a perpetual smirk, Schrödinger dresses in a Hitler Youth uniform which consists of black shorts, a yellow dress shirt, black knee high socks and a black tie. He also wears white gloves and black dress shoes. In the OVA series (Hellsing Ultimate) Schrödinger can be seen to have a tail when Doc tells him he can look at The Captain's guidebook. Though previously in the same scene he is shown to not have one and this is therefore normally associated to be a reference to his feline characteristics. Plus, while telling Zorin Blitz about when she would have been fried, he also had a tail there too, and did a fire effect on it. When that was done, his tail disappeared again.

Compared to the other Nazis, Schrödinger was rather comical and lighthearted, but still had a sinister air about him. Even so, he provided a bit of levity among Millennium and was often a headache for the Doctor due to his quips and jabs at the Major. The Major didn't seem to mind, however, even playfully going along with the jokes. Playful and childlike, Schrödinger also had a streak of cruelty, even towards his teammates. He, for instance, watches Rip and Zorin die and seems to be amused by it all, meaning he is likely sadistic underneath or alongside his cheerful demeanor.

Schrödinger first appears in Volume 4, in "The Panther's Den" as The Major returns, welcoming him. He comments on Tubalcain Alhambra's failure to defeat Alucard and tells the Major that it would be done if he had sent himself and the other Werewolves. He asks the Captain for support but nervously apologizes to the Major when the Captain just stares at him. He is with the rest of the Werewolves after the Major is attacked by one of "The Opera House men". Later he shows up out of nowhere at the conference between Hellsing, the Queen, and Iscariot. He delivers a message from The Major on a two-way hand held television, declaring war on England and Alucard. After he finishes, Integra orders Alucard to kill Schrödinger, who blasts his head off point-blank with the Casull. His body disappears soon after when no one was looking. He turns up in the command center of the Deus Ex Machina, apparently unscathed, commenting how the Major should try to lose weight, as he could travel half way around the world, have his head blown off, and come back there in the time it took for the Major to walk down a hallway. The Doctor grabs him by the collar and berates him for his lack of respect, but the Major waves it aside, finding Schrödinger's remarks amusing.

In the same episode, he appears again, this time on the deck of the British aircraft carrier HMS Eagle. Here, he delivers another message, this time to a defeated Rip van Winkle from The Major via two-way hand-held television. He wishes her "Auf Wiedersehen." with the other troops as Alucard devours her.

In OVA V, Schrödinger is present at the final preparations for Operation Seelöwe, having lost his manual and is ordered to share with The Captain.

His next appearance is in OVA VII, showing up in the remnants of Seras Victoria and Pip Bernadotte's memories to inform Zorin Blitz that Doc and The Major got their hands on a "new toy" (Walter) and are unable to attend to incinerating Zorin. He then bids her farewell, leaving her to be killed by a deranged Seras. He then shows up on the bridge of the Deus Ex with the Major overlooking the scorched and war-torn London, commenting, with a smile, on how his only concern is for destruction and warfare, gladly dragging his allies down to hell with him.

In chapter 77 Finesthour 2, he greets Sir Integra and Seras as they enter the landed Hindenburg II, making the mistake of continuing to call Integra "Fräulein" after The Major stopped doing so as a sign of respect (in the beginning of episode one of the OVA, Integra's uncle Richard, in the English dub, had referred to Integra as "Fräulein" when he tried to kill her). Integra then swiftly blows off his head (again) with her handgun. Due to his abilities, he survives this blow.

In chapter 87, "Wolffang 2", Schrödinger appears again. He smiles maniacally and decapitates himself with an SS knife with the words inscribed into it "Meine Ehre heißt Treue" or "My honor is called loyalty," the slogan of the SS. His body then falls into the blood that Alucard is drawing and absorbing into himself. Schrödinger was in fact the "poison" that The Major spoke of in chapter 84, Warcraft 2. As Alucard's eyes close, Integra demands that the Major explains what is happening. The Major says that Schrödinger "carried the will of the self-observing Schrödinger's Cat" and "as long as he recognizes himself, he's everywhere and nowhere." But now that he is consumed by Alucard and is mixed with millions of other minds, he can no longer recognize himself, and by extension neither can Alucard, the one who has absorbed him. Whilst neither are technically dead, they do not exist in one place because they cannot recognize themselves, and have thus become "No more than a set of imaginary numbers."

Alucard seems to recognize his defeat, says farewell to Integra, and seems to disappear into thin air, leaving only the bloody Hellsing-pentagram on the ground, possibly symbolizing him being sealed away once again and all that remains of Schrodinger is his tie and the other items of the people who died. Yet Alucard manages, in the end after 30 years, to return; Alucard kills off the 3 millions plus souls that reside in him so he can recognize himself. In doing so, it appears that he gained Schrödinger's powers, as shown by the fact that he appeared out of nowhere in Integra's bedroom and was perfectly fine after not having drank any blood for 30 years. Before this, a span of twenty years without blood reduced him to a corpse-like state. Schrödinger's soul is still within Alucard, as he mentions that he killed everyone except one and says "and now I am everywhere and nowhere"; implying he now has full access to Schrödinger's abilities along with his life force due to him being technically not dead and Alucard's eyes being pink. 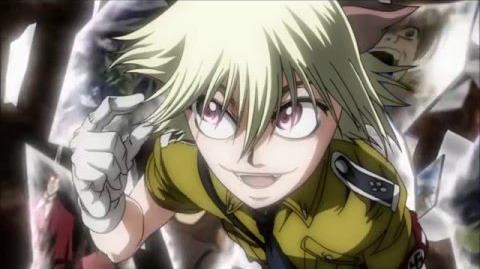 The exact nature of Schrödinger's abilities is tied-in directly to the state of his existence. It is confirmed by the Major that Schrödinger only exists for as long as he is aware of himself. He was able to appear in Hellsing's conference room without difficulty, despite the high security of the building at the time. He also appeared inside Zorin Blitz's illusions while Blitz was attempting to attack Seras Victoria's mind, indicating that he can appear in mental realms as well. Schrödinger himself often states that he is "everywhere and nowhere", meaning that if he believes that he exists somewhere, then he will. In essence, his powers can be summed up as 'I think, therefore I am.' This also explains his apparent regeneration/immortality and teleportation abilities. If he thinks he's at a location at any moment, then he will be at that location. Even if Schrödinger is fatally wounded, if he believes that he is alive and unscathed, then he will be. This can be seen when Alucard drinks the blood of Rip Van Winkle. He is sitting on the ship with the hand television, while in next scene we can see him standing on the right side of the Major. A few seconds later we can see him again sitting on the ship in the same position as he said "Auf Wiedersehen" to Rip.

The Hitler Youth rank that corresponds the best with Warrant Officer is that of Oberscharführer.

Community content is available under CC-BY-SA unless otherwise noted.
Advertisement