One of Millennium's top soldiers and a member of the Werewolf special forces, Rip van Winkle commands her troops to steal an aircraft carrier called the Eagle from the British. 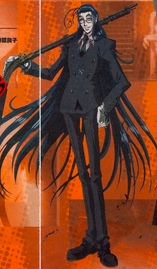 Rip van Winkle is at least 70 years old, but looks to be in her early twenties due to her artificial vampiric nature. She is tall and lanky, with glowing blue eyes and freckled cheeks. She has long blue tinted black hair that reaches down to her knees. A few bangs tend to stick up from her head, including a particularly long lock of hair that ends in a curl.

Rip's usual outfit includes a dark blue-purple suit, a dark pink dress shirt, a green tie, and black shoes. She also wears glasses, white gloves - presumably to protect her hands when firing her musket - and a large silver Swastika pendant. In a flashback, she was also seen wearing a Nazi military uniform with her hair tied into two long braids.

Rip is one of the more playful and cheerful members of Millennium's commanders, exhibiting a rather childish personality on most occasions. While on-board the Eagle, she counts down the time to Millennium's attack by using a pink alarm clock with a cartoon face on it. Her freckled face, enthusiastic mannerisms, and use of a pigtailed hairstyle in 1944 further emphasize her air of youthfulness. However, she can be quite vicious depending on her mood, ruthlessly killing the zombified crew of the Eagle along with their vampiric captain. She is frequently seen grinning evilly when using her musket to shoot down incoming enemies as well.

She enjoys singing and operas, with her favorite being Der Freischütz. According to the Major, she is very much like the character of Kaspar, including her personality and her choice of weapon  - in fact, the Major once told Rip that he felt that she would even meet her end in the same way as Kaspar: slain and devoured as punishment for her sins.

Perhaps as a direct consequence of this, Rip is utterly terrified of Alucard, who she equates with Zamiel, the "Black Huntsman" who eventually kills Kaspar at the end of Der Freischütz. Notably, Rip senses Alucard's approach long before he actually arrives on the Eagle, and immediately begins panicking. She also exhibits extreme reluctance to fight Alucard, only briefly gathering herself when she remembers the Major asking her how she would act when faced with impending death.

Before the Events of HELLSING

In Hellsing: The Dawn, Rip makes an appearance as a young human soldier fifty years ago, encountering Alucard while he was smoking with his sentient coffin. She appears in full uniform, wearing her hair in two braided pigtails, and bears the rank of Untersturmführer. The glasses she wears (which are not actually hers, but were mixed up in the confusion) make it difficult for her to focus properly, and Alucard spends some time trying to make her understand who he is and why he's in the building. Finally, realizing that he is an enemy, Rip tries to shoot Alucard, but is knocked unconscious by his sentient coffin in an amusing way: being Judo chopped and kicked across the hall.

Sometime in her life she was transformed into an artificial vampire.

The Events of HELLSING

Rip was assigned by the Major to take over a British ship, HMS Eagle, as a distraction for Alucard - whether or not she knew the exact condition of her mission is unknown. As she piloted a helicopter towards the carrier, a trio of vampires planted among the ship's crew revealed themselves and devoured all those on board, turning them into ghouls. When Rip arrived, she killed the vampires now commanding the ship and allowed her own troops (members of the Letzte Bataillon) to emerge from their coffins in the bowels of the ship.

After painting the Nazi emblem onto the deck in blood and paint, Rip rechristened the carrier "the German Third Reich's Atlantic Flagship Adler" and began eagerly counting down the time before Millennium's assault on London. During the day, she used her magic bullets to shoot down a squad of SAS helicopters sent to reclaim the ship. Seeing the true scope of their foe's power, Sir Penwood and his staff allowed the Hellsing Organization to intervene. To circumvent the ship's defenses, Integra Hellsing sent Alucard over on a remodeled SR-71 Reconnaissance Jet, allowing him to easily dodge any missiles or guns the Eagle/Adler could fire at him.

As night fell, Rip shot down another attempt by British jet fighters to destroy the Eagle, only to begin panicking when she sensed Alucard's approach. When the Eagle's guns failed to destroy the diving plane, Rip used one of her magic bullets to repeatedly perforate the nosediving plane. Unfortunately for the Nazis, Alucard released his Control Art Restriction System to Level One and used his shadows to hold the plane together as it crashed into the deck of the ship. Amid the burning wreckage, Rip was paralyzed with fear at the sight of Alucard. At her troops' urging, she fled before the enemy vampire could grab her face, but only found herself given a brief reprieve when Alucard slaughtered her remaining forces.

Alone against Alucard, Rip nearly broke down in terror before she remembered the Major asking what she would do once confronted by her "Zamiel". Regaining her composure, Rip defiantly confronted Alucard with her musket, firing a magic bullet that repeatedly tore through the red-clad vampire's body. Although Rip's assault nearly forced Alucard off the deck of the ship and into the ocean below, her bullet was destroyed when Alucard managed to catch it in his mouth and crush it with his fangs. The shock of this feat reignited Rip's fear, leaving her helpless to stop Alucard from approaching her. After punching Rip in the face and lifting her into the air by the neck, Alucard staked her through the chest - just left of her heart - with her own musket.

As Alucard bit into her neck and began drinking her blood, Schrödinger appeared on the Eagle's deck with a transmitter linked back to Millennium's zeppelin base. Through the transmitter, the Major congratulated Rip on a successful mission (trapping Alucard out at sea while the rest of his forces attacked London), forbidding the Doctor from cremating her with her implanted chip as a "reward" for her work. As the Major led the rest of Millennium in a military salute, bidding "Auf Wiedersehen" ("Sayonara" in the Japanese version) to his First Lieutenant, Rip was completely devoured by Alucard's shadows, becoming one of the many souls constituting his being.

When Alucard released his full power during the battle of London, Rip van Winkle was reconstituted as one of his many familiars. Partially merged with Tubalcain Alhambra, she used several magic bullets to ravage Papal Knights and the Letzte Bataillon alike. She shot down several of Maxwell's gunships and attacked Anderson during his final battle against Alucard. When a Helena's Nail-enhanced Anderson stabbed Alucard through the head with his bayonet, Rip was among the many familiars seen being engulfed in flames, likely killing her for good. This scene was not published in Young King OURs, but was added to Volume 9.In the Volume 10 chapter, "Oblivion", Rip's musket is seen among the items of the major characters who died during the series. 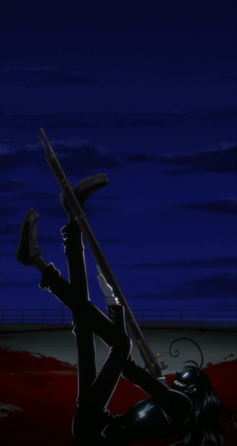 She does not appear to have any other powers beyond this other than the typical enhanced strength, speed, and agility. Although they did not show much reliance when facing Alucard.

Community content is available under CC-BY-SA unless otherwise noted.
Advertisement