Control over the United Kingdom

The Queen (女王, Joō?) appears in Hellsing OVA 4 (Vol. 4 of the manga) to discuss the Millennium threat after Alucard returned from Rio de Janeiro.

Alucard expresses great interest when Integra informs him over the phone that the Queen will be making an appearance at Round Table Council. Upon his arrival, the Queen asks to see him. Out of respect, Alucard removes his glasses and approaches her, making short work of two bodyguards who attempt to stop him from getting too close. They speak to each other as old friends, with the Queen holding his face in her hands and remarking how he hasn't aged a day. Alucard's reaction is that of fondness, commenting on how she was the "same spirited young woman he met fifty years ago," and that to his eyes, "time had made her even more beautiful." After their reunion, Alucard gives her his full report on the new threat. After the Major delivered his dramatic war declaration to the room, the Queen gives Hellsing and Alucard one order: Defeat them.

In the English commentary on Hellsing Ultimate Vol. IV, Ralph Lister (the voice actor for Walter) asked voice director Taliesen Jaffe if there was any kind of attraction between Alucard and the Queen. Jaffe commented that he was confident that they had "shagged" at one point in the past. This has not been confirmed by the author or any official sources, though it is strongly implied by the surprising amount of tenderness and affection between the two characters. 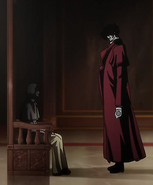 Retrieved from "https://hellsing.fandom.com/wiki/Queen_of_England?oldid=27332"
Community content is available under CC-BY-SA unless otherwise noted.