Pip's Grandfather is a retired mercenary, and one in a line of them, which would eventually include his grandson Pip Bernadotte.

Pip's grandfather is an old man with bright green eyes that almost seem to glow. His hair is white with age, fringed on both sides, and his skin is the slightest bit tan. His features are sharp, somewhat prominent, and he is wrinkled around the eyes and mouth, again with age.

Not much can be said from how much is shown, but Pip's grandfather was not ashamed of having been a mercenary nor being from a long line of them. If anything, he is amused at his grandson's being upset over it. From the way he described killing, it could be said he is unattached and cold, at least to the job. Despite this, he does comfort Pip by telling him the truth of their family, being mercenaries since his (Pip's) "grandpa's grandpa's grandpa's grandpa." His acceptance extends to knowing his son died being a mercenary though his speech implies he has some complex feelings with being a mercenary, acknowledging that the idea of fighting for fun is something too horrible to admit.

Appearing in Hellsing: Ultimate VII a young Pip, upset from the jeers of his classmates at school, questions his grandfather about the veracity of their accusations -- that he is the son of a murderer -- Pip's grandfather confirms it, bemused by why Pip is tearing up before realizing that Pip's mother never told him. He tells Pip the true reason his father died in Colombia and that the reason he took up mercenary work in the first place was because he knew Pip was on the way and needed money to support his child. When Pip asks ony why the killing, he gives Pip a speech about the nature of being a mercenary. He himself says it was never for the money, only the fun. Once upon a time, he served in the Wild Geese.

He predicts -- correctly -- that Pip, for all his tears now, will "come around one day", stating the apple doesn't fall far from the tree. 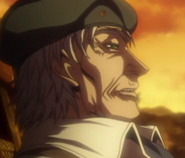 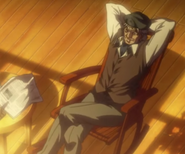 Add a photo to this gallery
Retrieved from "https://hellsing.fandom.com/wiki/Pip%27s_Grandfather?oldid=26427"
Community content is available under CC-BY-SA unless otherwise noted.