Luke (Left) and his brother Jan (Right).
Add a photo to this gallery

Luke as seen in original Hellsing Anime.
Add a photo to this gallery

Luke (Left) and Jan (Right) walk towards the Hellsing Mansion.

Luke and Jan walk towards the Hellsing Mansion.

Luke and Jan walk towards the Hellsing Mansion.

Luke (Right) and Jan (Left) pretend they are about to leave after talking to one of the guards at the Gate of the Hellsing Mansion.

Luke and Jan stand in front of the Hellsing Mansion.

Jan asks Luke if the Ghoul Army is reliable or not by saying, "Dude, Bro, these guys are complete fucking idiots. Are you sure about this shit?"

Luke stands in front of the Hellsing Mansion.

Luke and Jan talk about the Major.

Jan (Right) and Luke (Left) after killing much of hellsing guards.

Luke checking out paintings on the walls of the Hellsing Mansion.

Luke about to kill a Hellsing Soldier with his combat knife.

Luke after killing a bunch of Hellsing Guards with his Combat Knife.

Luke gets a call from Jan Valentine.

Luke picks up the Call from Jan Valentine.

Luke replies the call from Jan by asking, "What?"

Luke's Reflection shown on a glass while his conversation with Alucard.

Luke talking to Alucard in the sub-levels.

A close up of Luke's Eyes.

Luke takes a shot in the head from the Casull.

Luke says "Checkmate" after he shoots Alucard and thinks he defeated him.

Luke astonished after witnessing the power of the Jackal.

Luke astonished after witnessing the power of the Jackal.

Luke brags about his power after he dodges a bullet from the Jackal.

Luke boasts about his power while aiming his M1 Garand at Alucard.

Luke confident of his Victory against Alucard.

Luke terrified after Alucard regenerates from his wounds easily.

Luke loses his leg after taking a shot from the Jackal.

Luke trying to run away after losing one leg.

Luke after losing both of his legs.

Luke after the loss of both of his legs.

Luke scared when Alucard orders him to regenerate his severed legs.

Luke yells "BASTARD" after Alucard orders him to regenerate his severed legs.

Luke calling Alucard "A Dog for the Church of England" before getting devoured by Baskerville.

Luke's Combat Knife (Left) shown as his shrine at the end of OVA X along with his brother Jan's Hat (Right).
Add a photo to this gallery 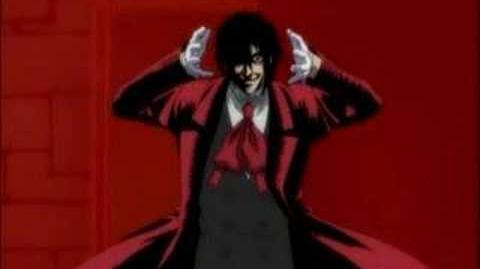 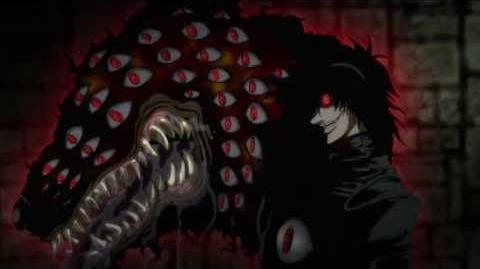