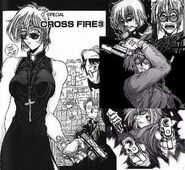 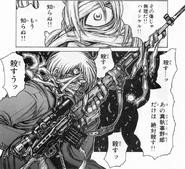 Heinkel aims her Pistols at Schrodinger. 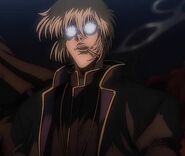 A Close-Up of Inscription on Heinkel's Pistols.

Heinkel and Yumie shocked after Anderson wishes them Farewell,

Heinkel kills Familiars with her Pistols.

Heinkel ad Yumie along with other Iscariot members shocked as Anderson faces Alucard.

Heinkel and Yumie along with other Iscariot members staring in shock at Anderson's "Monster of God" Form.

Heinkel Wolfe badly injured after getting shot by The Captain.

Heinkel after the 30 Years Time-Skip.

Add a photo to this gallery
Retrieved from "https://hellsing.fandom.com/wiki/Heinkel_Wolfe/Gallery?oldid=26487"
Community content is available under CC-BY-SA unless otherwise noted.