The Harkonnen II is an extremely heavy and destructive weapons system designed for and used by Seras Victoria with the exclusive purpose of defending Hellsing Organization headquarters. It had a gross weight of 345kg and sported a pair of 30mm auto cannons belt-fed from two large ammunition boxes carried on her back. Its maximum range was 4 kilometers (4000 meters), and was used to destroy a barrage of Millennium's missiles in midair and even shoot down one of their airships; the system was used to great effect against Zorin Blitz's invasion force, considerably thinning her forces and prompting a ground invasion.

For additional firepower, the pair of cannons could double as a grenade launcher, launching two of the explosive incendiary grenades for wide-area field dominance "Vladimir," one from each barrel. Due to Seras' vampire strength, she could move around with the system with relative ease after she discarded the massive ammo boxes. 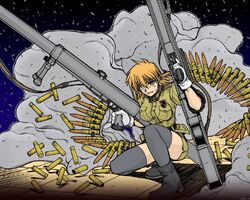 Seras Victoria using the Harkonnen II in the OVA
Add a photo to this gallery
Retrieved from "https://hellsing.fandom.com/wiki/Harkonnen_II?oldid=24743"
Community content is available under CC-BY-SA unless otherwise noted.