Minako Ichiki (TVA)
Hiroki Yasumoto (OVA)
Ghouls (食屍鬼 (グール), Gūru?) are zombie-like vampires that are created when a vampire drains the blood of a non-virgin human.

After being reanimated, Ghouls appear sickly and grey-skinned. Their teeth are sharp and elongated, with the Millennium variation bearing fangs very similar to a vampires. The eyes of a Millennial Ghoul are also purple, to the pale orange of a normal ghoul. Their bodies also appear to be rotted and quite vulnerable to tearing.

They are under the control of the vampire who bites them, eat human flesh, and are intelligent enough to use firearms. Due to their undead state, ghouls possess low-level invulnerability to conventional injury; allowing them to survive multiple gunshot wounds and even being dismembered (as seen in the second OVA). They are however, vulnerable to weapons made of silver; especially when hit in the head or heart. When fatally wounded, they instantly crumble to dust. It is not rare to see a vampire amass a small army of ghouls for offense and defense. Despite their relative skill compared to the lumbering undead of other lore, they are still quite slow and lack the intellect to execute any manner of defensive maneuvers, making them vulnerable to specialized weaponry. Once they have been tainted, ghouls cannot be cured.

Ghouls, as suggested by Walter C. Dornez and Jan Valentine in OVA II, seem to not only follow orders to fight, but comply with any other orders from their vampiric masters as well. Artificial vampires can make all of their victims ghouls regardless of the status of their virginity. These types of Ghouls also survive even if the host vampire is destroyed. Altogether, ghouls created by the Millennium Organization are of a much higher quality than regular ghouls.

Fate of the Soul[edit | edit source]

The victim's soul is taken in by the vampire if they are turned into a ghoul (although a soul can be taken if they're not directly bitten, such as licking blood from a bleeding body, or if the victim is dead when they're bitten, regardless of their virginal status). It is possible that the ghouls can still manifest, even if it's original body is destroyed, as long as the vampire that created them is still in possession of their soul, as Abraham Van Helsing claimed to have destroyed all of Alucard's servants and yet he was still able to manifest all the soul's he'd taken, when at release state level 0; and later claimed he still had to destroy all the souls inside him, despite Anderson destroying their manifestations in the London invasion. Once the host vampire who made them destroyed, the souls they've taken will be destroyed as well.

Cheddar Priest and his ghouls

Ghouls in the London Invasion

Ghoul shot in the head 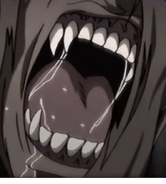 Millennium ghoul teeth
Add a photo to this gallery
Retrieved from "https://hellsing.fandom.com/wiki/Ghoul?oldid=27576"
Community content is available under CC-BY-SA unless otherwise noted.