The Hound of Baskerville

Its form varies, but it usually appears as a large dog with shaggy black fur, multiple red eyes, and a large, fang filled mouth. It typically emerges from either one of his arms, almost serving as some sort of extension for his selected limb. Baskerville appears to be one of Alucard's favorite familiars, since he tends to use it against opponents he considers challenging. It is also one of the only familiars within Alucard to survive Anderson's destruction of Alucard's familiars.

It wasn't uncommon for Alucard to take on a dog-like form, the canine appearing shaggy and black with multiple eyes of crimson color. It is unknown if this is purely Alucard's shape shifting ability in action or if the vampire has taken on the dog's visage to inconspicuously navigate throughout humanity. However, the dog has multiple red eyes which undermine the efforts of the latter possibility, so it is likely the former.

Baskerville is first seen in Hellsing Ultimate as the Valentine brothers assail the Hellsing Manor. While Jan Valentine causes havoc up-top, Luke Valentine heads below to face off with Alucard. After Alucard and Luke engage in a high-speed pistol duel, Alucard is impressed by Luke's amazing speed, reflexes, and accuracy, and decides to release his Level One state in order to gain an advantage over Luke. Luke attempts to retreat, but Alucard takes out a gun from the Baskerville's mouth and shoots one of Luke's legs off. After seeing Luke's cowardly demeanor, Alucard mocks the artificial vampire and calls him pathetic. Luke responds by calling Alucard a dog of the Church of England, and Alucard tells him to be silent. Alucard calls him dog food, and sicks the Baskerville on Luke. The artificial vampire desperately fires his pistol, but it is no use, and the Baskerville proceeds to consume Luke, ripping off both of his arms and ending the battle between the two vampires.

Later, during the battle between Alucard and a newly vampirized Walter, Alucard decides to unleash the Baskerville in an attempt to gain an edge over him. Unfortunately, Walter is able to easily rip apart the Baskerville with his Monofilament Wires and slices it in half. Upon dying, Luke Valentine was released from its bowels, and Walter uses his wires to enter Luke's body and control the Baskerville as a puppet. The Baskerville gains blue eyes and proceeds to attack its former master, ripping Alucard apart. Then, when the hellhound has Alucard in its mouth, Alucard uses the opportunity to load his Cassul and shoots the Baskerville, ending its life once and for all. 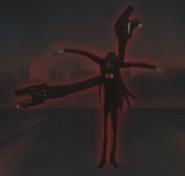 Add a photo to this gallery
Retrieved from "https://hellsing.fandom.com/wiki/Baskerville?oldid=27256"
Community content is available under CC-BY-SA unless otherwise noted.